In his 2002 essay Je Est Un Autre, I Is Another, while discussing his thoughts on art and spirituality, Caveh Zahedi suggests that artists, rather than being the geniuses that our culture has deemed them to be, are in fact simply channels of God’s genius, and that if the artist has any sort of ‘gift’ it is merely to be closer to that genius.
The problem today, Caveh says, is that our culture has lost much of its self-worth, and that artists compensate for this by emphasising their ‘specialness’ and inflating their egos.
And hence, a problem arises in that if in fact art is channelled, then art depends on the connection of the artist to the source of creation, to God. But the ego destroys this connection by presenting itself as the source of creation. And so, the artist in modern times has not only to channel God, but must also engage in a battle within themselves.

Caveh has been engaged in this battle for most of his 30 odd year film making career, seeking the glory bestowed upon established film makers, but creating films that are too personal and idiosyncratic to draw a large audience.
He’s made 5 feature films, numerous short films, several pilots for programs that ended up not being made, and currently works on a tv and web series called The Show About The Show.

Born in the US to Iranian parents, Caveh’s childhood included a lot of moving around. He and his sister spent a couple of years at a boarding school in Switzerland, where Caveh learned French and became a Francophile.

He went on to study philosophy at Yale University, before turning his attention to film studies. 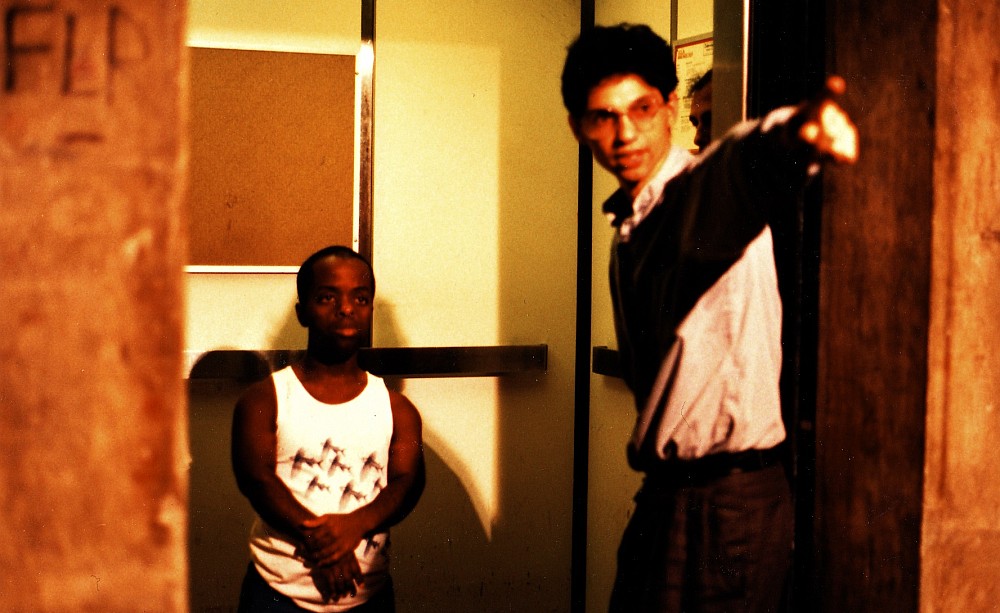 Caveh on the set of a student film, with Selwyn Emerson Miller, who would later appear in Boogie Nights, 1986.

He has flirted with mainstream success. His first feature film, A Little Stiff, co-directed with his friend and long term collaborator Greg Watkins, competed at the Sundance Film Festival in 1991 alongside other independent film makers of note such as Todd Haynes, Richard Linklater, and Hal Hartley.

A Little Stiff screening at the Beverly Cinema, Los Angeles.

Those film makers have all gone on to have very successful careers, garnering both peer and public support. Caveh hasn’t. His films, a mix of documentary and memoir, which use mostly documentary and non-fiction film devices, but can in fact be seen as narrative films, or as artworks, have managed to remain on the margins of the mainstream.

On the set of I Am A Sex Addict with (l-r) Greg Watkins, actress Alithia Garcia-Romero, producer Thomas Logoreci, and production assistant Amy Capen.

Caveh has courted controversy with his films, often pushing the envelope of what is ethically acceptable in a film.
His second feature, I Don’t Hate Las Vegas Anymore, was a deeply personal documentary road movie in which he gave his elderly father who may have had a heart condition and his teenage half brother ecstasy, and then filmed their trip.
Several of his films feature footage of his wife while she is clearly asking him to NOT film her.
An episode of The Show About The Show features him fighting with his toddler son, who is unwilling to appear in front of the cameras, much to Caveh’s frustration.
In The Sheik and I, Caveh filmed people from one of the Emirates who could have gotten into trouble with the authorities for merely appearing in his film. 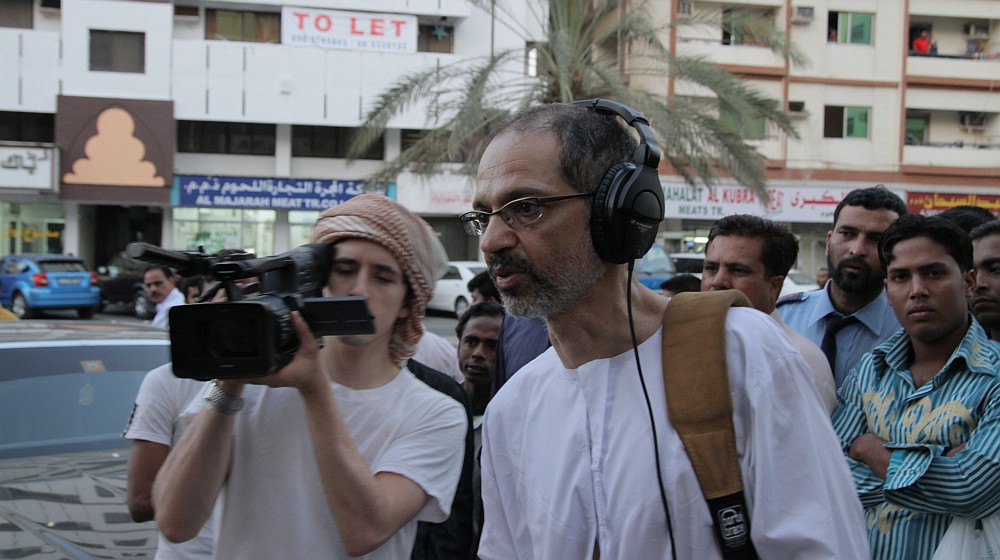 Caveh shooting The Sheik And I for the Sharjah Biennial, in Sharjah, UAE.

Besides making his own films, he’s also appeared in the films of others, including small roles in Alexander Payne‘s Citizen Ruth, and a well known scene in Richard Linklater‘s Waking Life where he discusses his idea of the ‘holy moment’. He also appeared as the lead in Greg Watkins’ film A Sign From God.

His films are all individual pieces, but they are also parts of a much larger project, a kind of multimedia recording of a life, his life.
We talked to Caveh about film making, about the difference between ego and god, about what it means to be an artist, the tension between the art path and the spiritual path, and about the moral quagmire that film making can present.

Music:
I Am A Sex Addict cello magic by Hilary Soldati, courtesy of Caveh Zahedi.
Caveh Says by Will Oldham.
Song For Caveh Zahedi by Don Lennon.

An early Awkward Celebrity Encounter?
Caveh with his sister and Woody Allen, photographed by his father in Las Vegas, circa 1966.